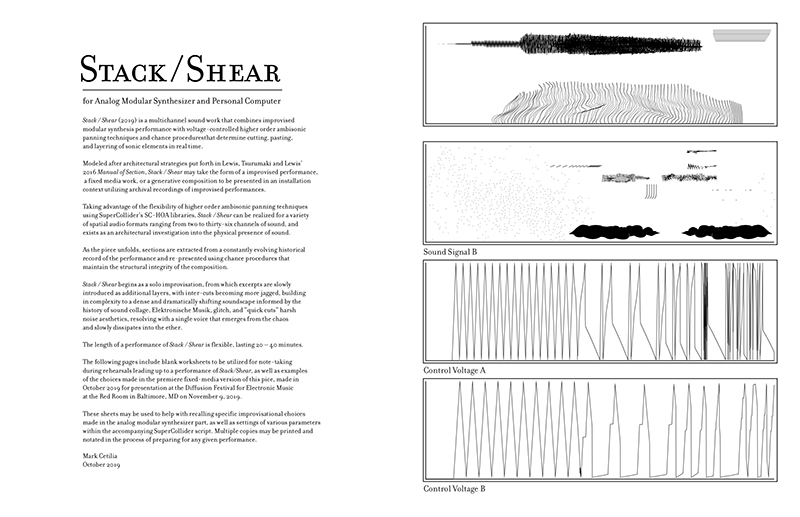 Modeled after architectural strategies put forth in Lewis, Tsurumaki and Lewis’ 2016 Manual of Section, Stack / Shear may take the form of a improvised performance, a fixed media work, or a generative composition to be presented in an installation context utilizing archival recordings of improvised performances.

Taking advantage of the flexibility of higher order ambisonic panning techniques using SuperCollider’s SC-HOA libraries, Stack / Shear can be realized for a variety of spatial audio formats ranging from two to thirty-six channels of encoded audio, and exists as an architectural investigation into the physical presence of sound.

As the piece unfolds, sections are extracted from a constantly evolving historical record of the performance and re-presented using chance procedures that maintain the structural integrity of the composition.

Stack / Shear begins as a solo improvisation, from which excerpts are slowly introduced as additional layers, with inter-cuts becoming more jagged, building in complexity to a dense and dramatically shifting soundscape and resolving with a single voice that emerges from the chaos and slowly dissipates into the ether.

The length of a performance of Stack / Shear is flexible; presented here is a stereo, fixed-media realization of the piece with a duration of 18'43" to be premiered in 8.2 channel sound as part of the Diffusion Festival for Multichannel Electronic Music at the Red Room in Baltimore, MD on November 9, 2019.